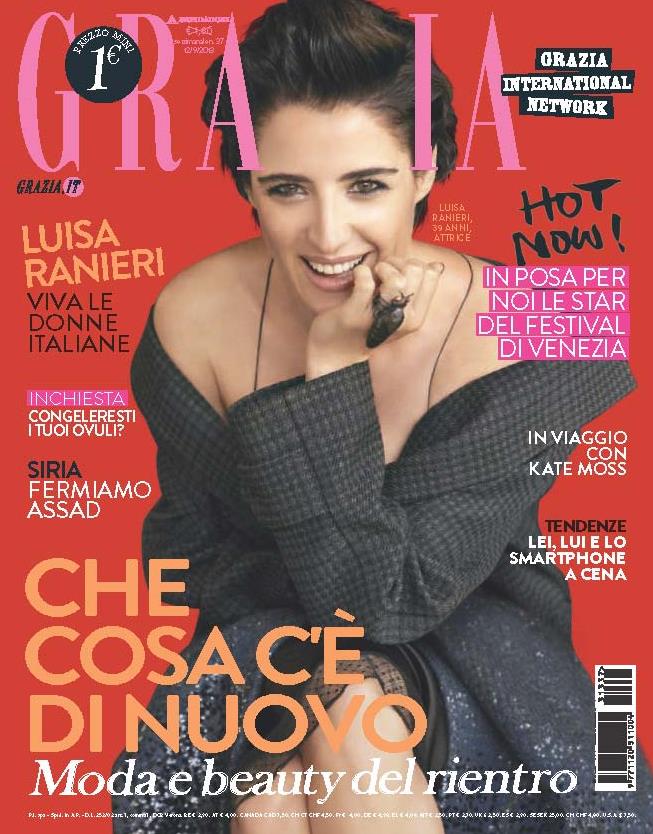 I'm excited to share that Chill was part of the article Egg Freezing?  Some Consider it a Sexual Revolution in the September 12th issue of Grazia, an Italian fashion magazine!

The original article (pic below) was in Italian, but with a little help from a friend, it's been translated to English.  Enjoy and let me know what you think!

As someone who calls it the "second sexual revolution", disruptive as the first, triggered by birth control pills, others see it as "insurance for fertility", a "strategy to stop aging ".  We are talking about oocyte cryopreservation, a technique developed from medicine to postpone the possibility of becoming mothers.  Let's step back. Until now, in a woman's life, there were studies, the frantic search the "right job", career.  The engaged couple arrived, disappeared. Motherhood was a distant goal.  And the years passed. When it was decided to have a family, the children did not come. Why, yet not everyone knows that, with advancing
age, women produce less and low quality eggs.  (This is the main risk factor for infertility). Today has brought the revolution:   want to have children, but you're not ready yet?   Just freeze the eggs at a young age and keep them until you get the "moment is right”.  In the US where until December it was considered an experimental technique, everyone is talking about egg freezing.  After college, the new trend of the non-American is to get breasts or a fake nose, but now egg freezing. "Yet the country with more edge is Italy. “ Merit of the hotly contested Law 40," says Giulia Scaravelli, head of the National Register physician-assisted procreation. A rule, preventing freezing embryos, has prompted researchers to develop the techniques on eggs.  Nowadays there are 126 Italian centers where you can take this medical treatment and the results are great (the birth of the first child of female gametes was at the beginning of the 80s.  In Italy from 2005 to 2011 the number grew to 1,670, and covers, for the moment, children of couples with fertility problems. In a few years, there will be the first of those who chose to postpone motherhood for personal reason and have frozen eggs). But with this technology, can women really stop the biological clock?  "Freezing eggs at 25 and then using them around 40 years old, does not block the aging, "says Andrea Borini, director of Procreation and Tecnobios, one of the greatest Italian experts. "But improves significantly the chances of getting pregnant, with the IVF because the cells that are used young (50% versus 15% probability)."  But the forties, once pregnant, in any case women are more susceptible to complications. "The truth is that for those who are concentrating on their career or do not have a stable relationship, egg freezing is a form of "preventative medicine”, '"says Pasquale Patrizio, professor of gynecology and reproductive sciences at the American university, Yale University. "The women who make this choice are not selfish, but far-sighted people.   (The series: "I want a job, to have fun and want to commit too. The family will come in the future ").  Infertility due aging is a real problem and underestimated."  But egg freezing can be scary: it is an invasive technique "Ovarian stimulation is done with injections and a few days later the doctor, with an ultrasound probe and under anesthesia to retrieve the eggs.  A simple procedure, painless.  Takes no more than a quarter of an hour, "says Andrea Borini.  "For women it is an opportunity (not a guarantee), but it will never be a treatment offered by the state.  It will only be available to those who can afford it, "says Giulia Scaravelli.  Costs are equal to a short exotic vacation:  2-3 thousand euro for the hormonal stimulation with egg retrieval and 100-300 EUR for their freezing every year.  Significantly less than American prices, around $ 10,000.

The advantage of being a gynecologist
"It's a possibility, not a guarantee. For a woman,  it is a single "parachute," says Francesca Bongioanni, 38, medical director of the center Livet of Turin. "I have 10 frozen eggs two years ago. I've never had a great desire to be a mother, but I have a few more questions, perhaps because of the work I do.  Every day I talk to women with fertility problems.  I said to myself: "If a day comes where I can’t get pregnant naturally, I still have the possibility of having a child.  I did the hormonal stimulation, I have not gained pound, and the retrieval did not give me any pain.  That day I played tennis.  Of course, in an ideal world women should have children around 20-25 years old. But things have changed. Personal realization has become important and we are no longer in a hurry to get married and have children.  We're looking for a fulfilling, stress-free,   love life. Egg freezing is a preventative technique, it gives us a better chance.  But the Italian is not very accustomed to dealing medical treatment to solve a problem that (maybe) will arise in the future.They are afraid of small procedures.  It is not easy to think of motherhood when you do not have the desire."

Making a film about egg freezing
“Women spend the majority of their lives practicing pregnancy prevention.  It’s just what we’re taught.  No one talks about fertility until they’re in a position where it has drastically diminished,” says Jennifer Frappier, 37, American actress. “I’ve always wanted to have a family.  That’s never been a question for me.  Turning 35 really threw me for a loop.  I made the decision to freeze my eggs because I didn’t want to miss the opportunity to have my own children and I didn’t want to pressure myself to choose a partner just because I wanted to have a family. After I decided to freeze my eggs, I started dating someone.  I knew I was going to start hormone shots soon so I figured it would be best to discuss it with him.  I was really nervous, but he was totally cool about it.  His exact words:  ‘I think that’s really smart.’  It’s been two years and we’re still together.  I'd like to get pregnant naturally before 40.  If I can’t then I’ll thaw and use my eggs in storage.   If I don’t have to use the frozen eggs, I’d love to donate them to an infertile couple.  I decided to share my story through a documentary film and a blog (www.chillthedocumentary.com) to encourage women to start the fertility conversation sooner – before they are in a place of panic or regret." The documentary is expected to be released next June in Los Angeles.

Italy?  It’s cutting edge and cost less
“Having children has always been high on the list of my desires, but life took me elsewhere:  I’m in international relations.  I have an exciting, intense job where I travel a lot, based in Washington DC, "says MR, 40, who prefers to remain anonymous.  The men I have met so far have been meteors. At 36 I froze six eggs in a clinic in Bologna. I chose your country at the suggestion of a friend of mine:  in this field Italy is more technologically advanced and it cost less than in America. Sure, it was not easy to coordinate hormone therapy in America with egg retrieval in Italy. But everything has worked out. I decided to do it because I was afraid of being chased by regrets.   I know that when all is and done, the fertilized eggs may not lead me to motherhood. But I have a better chance.  And, compared to many friends, I live without anxiety and with less pressure. I don’t think that freezing eggs completely stops a woman’s the biological clock, but at least it is a little bit closer to men, who are born with the advantage: they can conceive a child for a lifetime.” 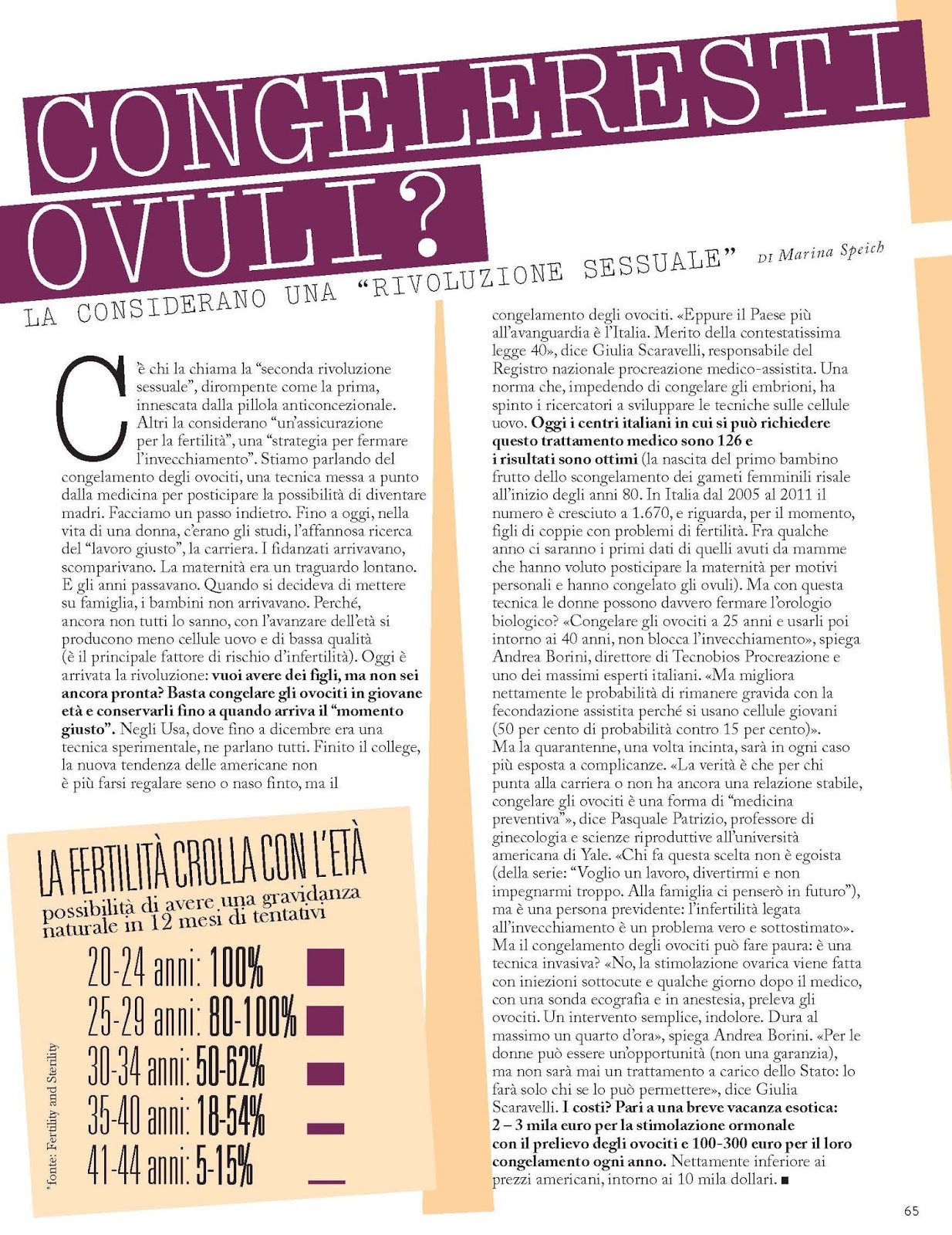 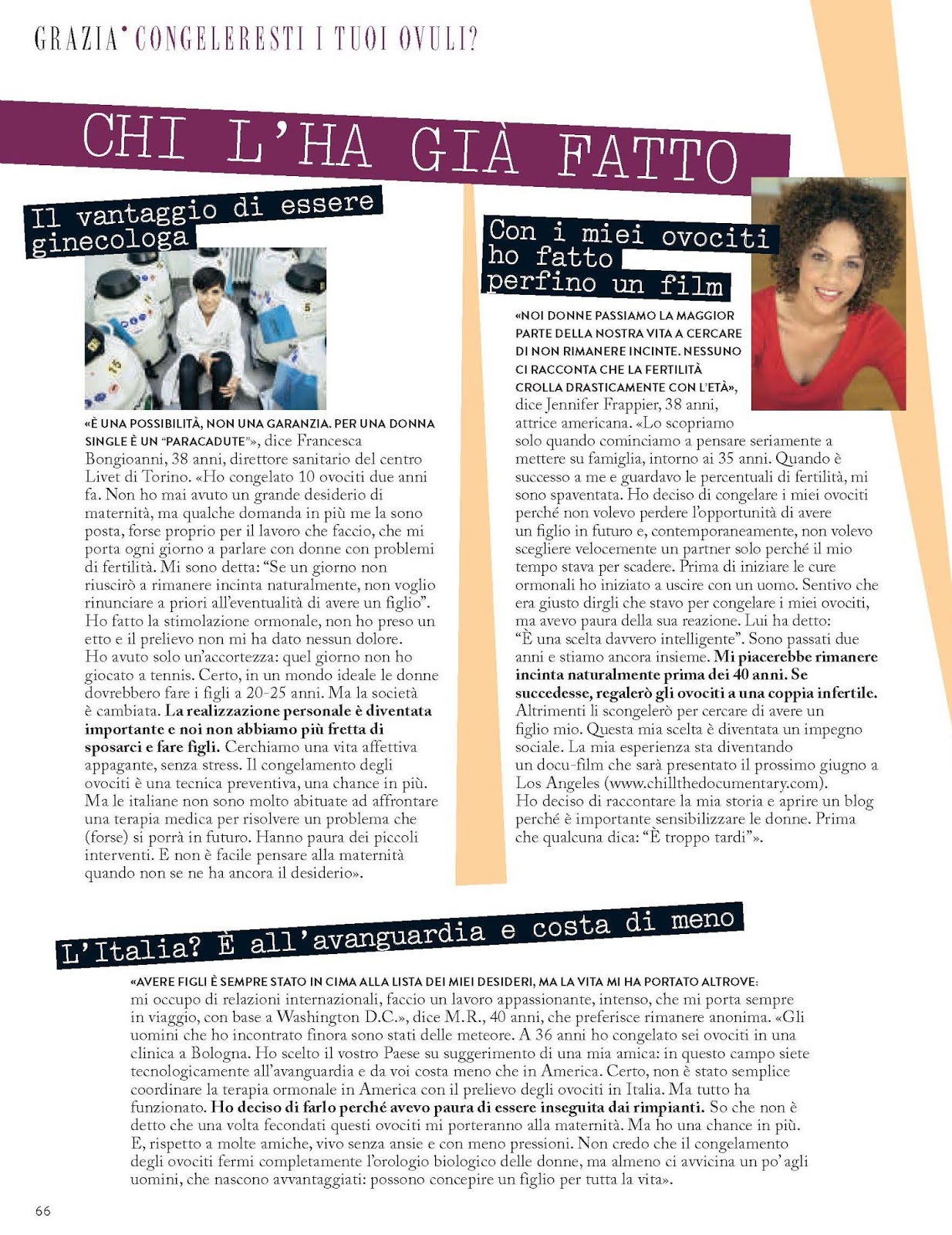