Front Page of the LA Times!

My eggs were on the front of the LA Times!  How cool is that? 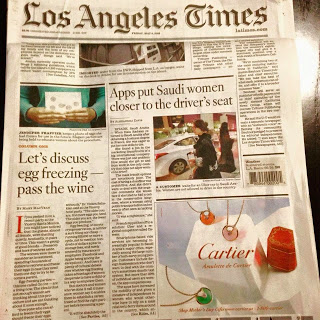 "We need to make a stride in our society ... toward making families an important part of society and being able to allow women to be part of the working world and still be able to have kids," Brennan said.
Wendie Wilson-Miller and Shalene Petricek founded Great Possibilities, the agency that threw the party at the Viceroy. Their company helps women find the right doctors, negotiate prices or financing and generally will "hold your hand" through the process. They are paid by the patients.
They also have gone through it themselves.
Petricek had been climbing the corporate ladder in the biotech industry, and, when she hadn't met a partner, decided to begin having her eggs frozen when she was 37 — an age when many women are considering it but an age when statistics are already against them.
Petricek, now 44, has been through four cycles and may try three more, she said over coffee. She was considered "a poor responder" and has 10 eggs — a disappointing surprise.
"I was in complete denial. I look young. I feel young," she said.
Wilson-Miller, who has worked in assisted-reproduction technology for 16 years, froze 22 eggs when she was 30 and single.
"For me, personally, it allowed me to relax a little bit," Wilson-Miller said. "I knew it wasn't a guarantee."
She later married and had two children the conventional way. Some of her eggs were then donated to a woman whose fertility was compromised by cancer treatments.
Christine Hoffman was thrilled that Wilson-Miller froze her eggs. One of them led to the birth of her daughter.
"If you have a desire to have a child," she told the Viceroy gathering, "and you have the opportunity to freeze that little egg, go for it."